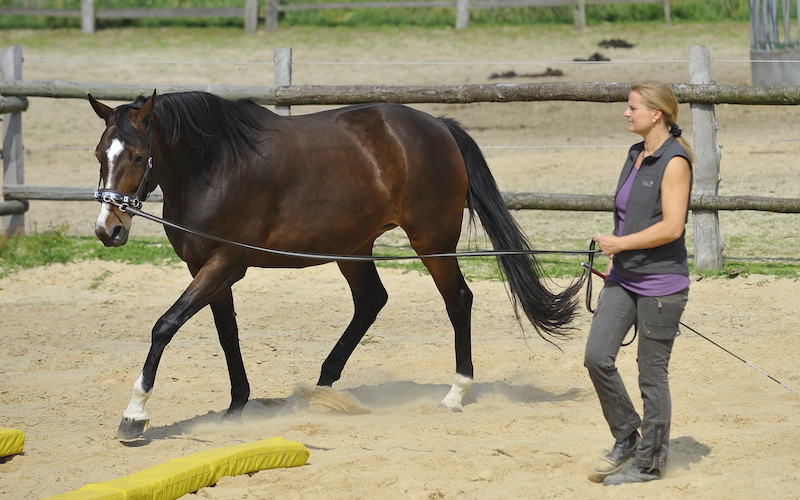 The question of whether the lungeing course work is suitable for horses with health problems is even harder to answer at long distance than that about old horses.  I would generally advise that you discuss any form of training of a horse with health problems with the vet in charge of treatment and with every illness that affects the horse’s ability to move with a physiotherapist as well.

Do, however, explain the lungeing course work to them fully enough for them to get a picture of the kind of work it is as lungeing work according to this course is really quite different to other lungeing methods.

Lungeing is not just lungeing!

Many vets and physiotherapists advise against lungeing horses with health problems.  This is because they tend to think that you will lunge your horse in a large circle with it moving skewed sideways, mostly at a really fast pace.  This is naturally harmful to your horse, which is why the specialists advise against it.

Training according to this lungeing course, as I have explained, is built up in a quite different way and has little to do with the other form of lungeing.  Explain the method of working to the vet or describe it rather as a calm form of ground work that aims to stretch the muscles, raise the shoulder and get the horse to move in a slow and controlled way.

In the meantime, many vets and physiotherapists have actually started particularly recommending this lungeing course training as it is a really excellent form of therapeutic gymnastics.

What kind of health problem is it?

Next we should be clear about what sort of health problem we are dealing with.  We are of course not talking about colic, acute illnesses etc. but mostly about something wrong with the horse’s ability to move.  For example lameness caused by joint illness or back problems such as the so-called “kissing spines”.

It is very important to distinguish between an acute injury or inflammation and a chronic injury.

Generally most cases of acute injury and inflammation need rest.  As a rule work at the trot and canter should in any case be omitted.  However a controlled walk is often helpful for the healing process (for example in the case of tendon strain due to hard ground).  In such a case you can then, for example, include Leading In Position in a straight line while you are going for a walk.

If your horse has a chronic illness which affects its ability to move, for instance arthritis, then a controlled, calm and regular exercise in large circles is particularly important to preserve movement and stave off “rusting”.  All difficult movements should be avoided as these tend to put a lot of pressure on the joints.

For horses with arthritis you should extend the walking phase when beginning work to up to 20 minutes long, so that the horse has plenty of time to warm up and so that the joints are well lubricated.

By working according to the lungeing course you relieve the presssure on the preferred foreleg and with it improve the healthy posture and general health of your horse.

Lameness in horses that fall heavily onto their inner shoulder are mostly much improved or altogether cured at the moment when the horse takes the weight off its inner shoulder and picks itself up (that is, abandons the “motorbike” position).  In this case the lungeing course work is more than just training, it is a sensible therapy which has the potential to cure the cause of illness.

Rules for working with horses with health problems

There are some special rules to observe in order to ensure that you do your horse good with the lungeing course work.

Start working for just a few minutes and carefully check your horse before and after the work:

Look the horse over carefully the next day.  If its condition has worsened you should reduce the work or leave it altogether.  When it goes just as well or even better, then gradually increase the programme.

Work your way gradually through the course, choosing the elements that are most suited to you and your situation and which are beneficial for your horse’s problems.

and take a look at the course without obligation!

Please enter your e-mail address and receive the first 30 pages of the course as a reading sample. I will keep your data secure and will never use it for anything else but contacting you!

Attention! You will need to confirm your e-mail address to allow us to send your further information including the 30 Pages reading example.  Please check your Inbox and your Spam Folder.