Alina and Moonlight – a Testimonial for the Lunging Course 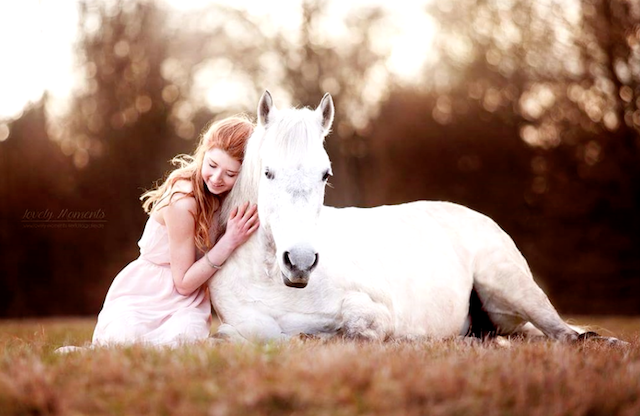 Here is our story and how the Lungeing Course changed our life!

How it all began

Let’s start at the beginning: Moonlight was born in Denmark. When she was five years old she was sent to Germany to be sold by a professional horse dealer. She did not like to be handled and was very shy. They tried to break her in, more or less. A family showed up, looking for ponies for their stable. They liked Mooni right away. They took her home to their Children’s Camp to turn her into one of their school ponies. It was a professionally run stable and they tried hard, but her progress was slow. One step forward, two back, and she needed more time than the stable could afford considering all the horses they had to train. On top of it, she could only be ridden by a few advanced students. And even those were run away with and bucked off. She ran around with a tight back and a neck like a giraffe.

I had attended this Camp for several years in my summer vacations. I rode Moonlight for the first time in the summer of 2012 and immediately fell in love with her. Why? No idea! She was not fun to ride. On the contrary, even Moonlight’s trainer told me she always felt sick when riding her! Moonlight was just too sensitive to be a school pony and endure different riders all the time. The stable owners decided to sell Moonlight into private hands. I tried everything to convince my parents that these should be my hands, because this grey, alert pony had won over my heart. And so my dream came true in the summer of 2013: my first own pony!

It was not an easy start. It took a year before we even began to become a team. One setback followed another. In my dressage lessons she was rushing around with a tense back. When I lunged her she tore away and ran off, and out on the trail she ran away all the time. One time we fell, and she ran off without me. We did make some progress, though, she especially liked groundwork. But nothing worked like I had hoped and expected.

Breakthrough with the Lungeing Course

Real progress, especially in dressage riding, came in 2015. We had begun to work with the Lunging Course. She understood the basics very quickly, beginning with leading in position and the “trolking”. She learned to raise her back, stretch her neck down, and bend at the poll and throughout her spine – all without side reins or other tools, just with the aids taught by the Lunging Course. At first, only a few steps, of course, and not continuously and in all gaits. But even so, Moonlight improved more than ever before. We became ever better partners and the runaway pony has turned into one that I can safely ride on the trail in just a balance rein around her neck.

At the end of 2015 we took our first Lunging Course with Babette in person. This work had been so much fun for me and Moonlight, and I wanted to confirm that I had done the tasks correctly. We worked on the slalom in walk and trot, shoulder-in at the walk, and a better way of moving. I was more than enthusiastic about the Course and we took away a lot of homework.

We attended the next Lunging Course only four months later. This time Moonlight picked up the travers in record time and we worked more at the canter. I was surprised again how much progress we could achieve with Babette in the smallest steps and the shortest time. The lessons were always divided up into tiny steps, so the horses could understand easily.

Today I have a pony that is always motivated and can be ridden in a healthy way, without ever running away. We have been working on smooth transitions and lateral movements, and started liberty work. I can free lunge her in all three gaits.

I don’t know where we would be today without the Lunging Course and even whether I would not have given up along the way.

You can watch our story in the following video. Enjoy!

and take a look at the course without obligation!

Please enter your e-mail address and receive the first 30 pages of the course as a reading sample. I will keep your data secure and will never use it for anything else but contacting you!

Attention! You will need to confirm your e-mail address to allow us to send your further information including the 30 Pages reading example.  Please check your Inbox and your Spam Folder.

A Course in Lungeing 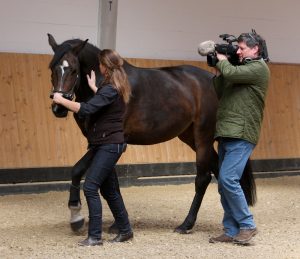 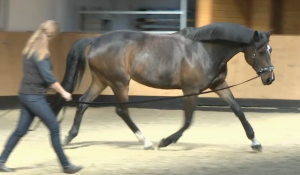 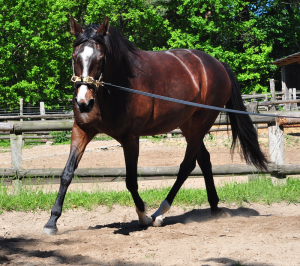 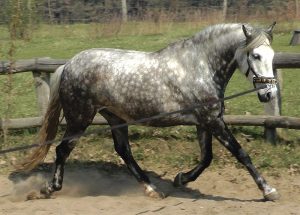 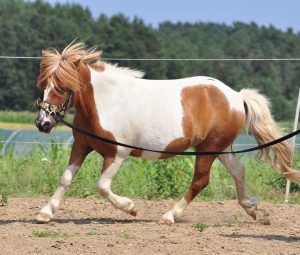 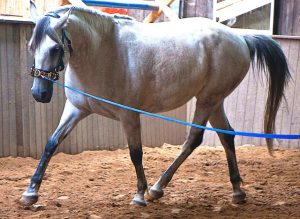 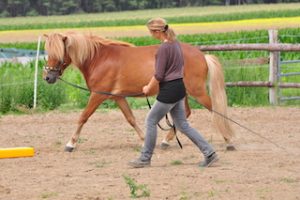 A really excellent course. Interesting for me, as a trainer, to read, as the course confirmed my determination to continue my opposition to the thankless business of lungeing on a bit and the tying up and packaging of horses with sidereins etc. and to continue to explain to people why. Through the course I have learnt many more good reasons for my opinion – to the benefit of horses – thank you so much!!! Karolin Evers

This deserves HUGE praise at any rate! Well structured, easy to understand and formulated to hit the nail on the head, VERY good strongly expressive photos and also so positively and warm-heartedly described – tremendously motivating!!! Anette Kascor

Thank you for your wonderful work. I am busy every day with your new course and my horses are grateful for it. I find the new explanations sooooo helpful!! A lot of the connections have really fitted into place now, which they hadn’t before. My ability to see things has really improved as aresult. THANKS!!! Claudia

I wrote to you a few months ago about my worries about my old riding pony mare with the bad back. In the meantime she is pulling a carriage again after months of preparation work on the lunge and the double lunge. She has acquired back muscles and for the first time in her life (she is nearly 18) understood what it means to produce supple, straight, and energetic movement. (I have also understood it, thanks to your Lungeing Course). The owner of the stables (who is also breaking her in to driving) looks at us rather in surprise when I lunge her in the riding arena and call “goooood girl” when she tries to bend and extend her neck or when I trot along side her instead of standing in the middle of the circle, but since I have more or less regularly worked according to the lungeing course I really have a new horse. Once again, many thanks for that! All best wishes!

Your book and your videos, as far as I have seen from my totally fascinating look at them so far, are just what most friends of the horse really need and what really serves the needs of the horse too. Your directions are something that someone who really goes into them, reading, looking, has patience and the will to do it, can work from well or rather really well. I hope that it is going to be as successful for me too ? And what I am really taken with, is the fact that you really properly explain, in a way that is really easy to understand, why it is, or indeed is not, good for the horse with both positive and negative examples that are presented in a way that is very easy to interpret. Where else can one find something like this? Helga Raschke

The course has really become excellent, successful in every respect – once again, many congratulations! It seems to me that one can really work well with it, even when one has to work alone – you really have a talent for setting it all out in small steps and explaining it all clearly and understandably. And I like all the pictures! They are also tremendously enlightening, but some of them are just simply lovely – how beautifully horses can move! I wish you both all the best with it and hope that the course has a really serious impact!All best wishes, Undine

I just wanted to say thank you very much for this great project and that I am going to devote myself to the re-worked reading matter as quickly as I possibly can as the first lunging course has already made a definite improvement in my horse. Unfortunately she has health problems in the saddle area (osteophytes on the body of the vertebrae) so that it became very difficult to use riding methods toachieve a good lengthwise bend and to raise the inner shoulder. In the meantime, it’s working pretty well, thanks to your work!Warmest best wishes, Gabriele Bellin

I am really taken with the re-worked version of your lungeing course! It covers exactly the problems that I have experienced. I have to confess to being a newcomer to lungeing. The first hurdle it posed for me was indeed how to deal with the whip and the lunge line – quite apart from position and bend 😉 The demonstration in the new videos is much much clearer. I have got to go and try it out with my horse right away. Do keep doing more. I am telling everyone how brilliant your written work is and how much trouble you have taken with it and I hope that lots and lots of other horse people are going to buy it. Yours sincerely, Anke and Täschi

I have been absolutely buried in the comprehensive new lungeing course. It is really a super piece of work! Such good explanations and all the many illustrative photos with the drawn-on indicators that really clearly back up the explanation! You can really work with this e-book on your own without having any worries that you might be making some serious mistake. A really good addition is the exact description and drawing on the theme of the “Language of the Stick”. And I’ve been able to look at the films in the Media Library too: very nice examples that really make some things clearer still. And the finishing touch: Health Spa Treatments for Horses! I have just tried them out and my horse sends warmest best wishes with a happy sigh and hanging lips! Many thanks again for this wonderful lungeing course! All best wishes, Ulrike Steigerwald

Thank you so much for the course! And thank you so much for the comprehensive and painstaking pulling together of all your material. I had feared that perhaps there scarcely were any other horse lovers that were really interested in lungeing properly. I have tried for years to go on courses given by various trainers to get my horse to lunge properly and in a way which suits its make up and not just “send it round in circles”. Even with renowned trainers I did not find what your course offers – as it is normally the case that the best people do not want to give away their specialist knowledge. At least, that has been my experience up to now. Many thanks and all best wishes, Kathy Asmuß

I have recently bought your online Lungeing Course and would like to thank you and Mrs Konnerth very much for your excellent and careful work. One feels how much of your life’s blood you have invested in the project and I do wish I lived near you and could meet you personally and get the benefit of your knowledge and ability – not least for the good of my horse. Your method of writing is excellent and easy to understand, even for beginners like me – yourLungeing Course suits me more than all the books and DVDs that I have tried to study on the subject so far, and which I had to shelve as they did not suit us or went completely over my head. Many many thanks for it! Victoria